Birds of the Monarch Habitat 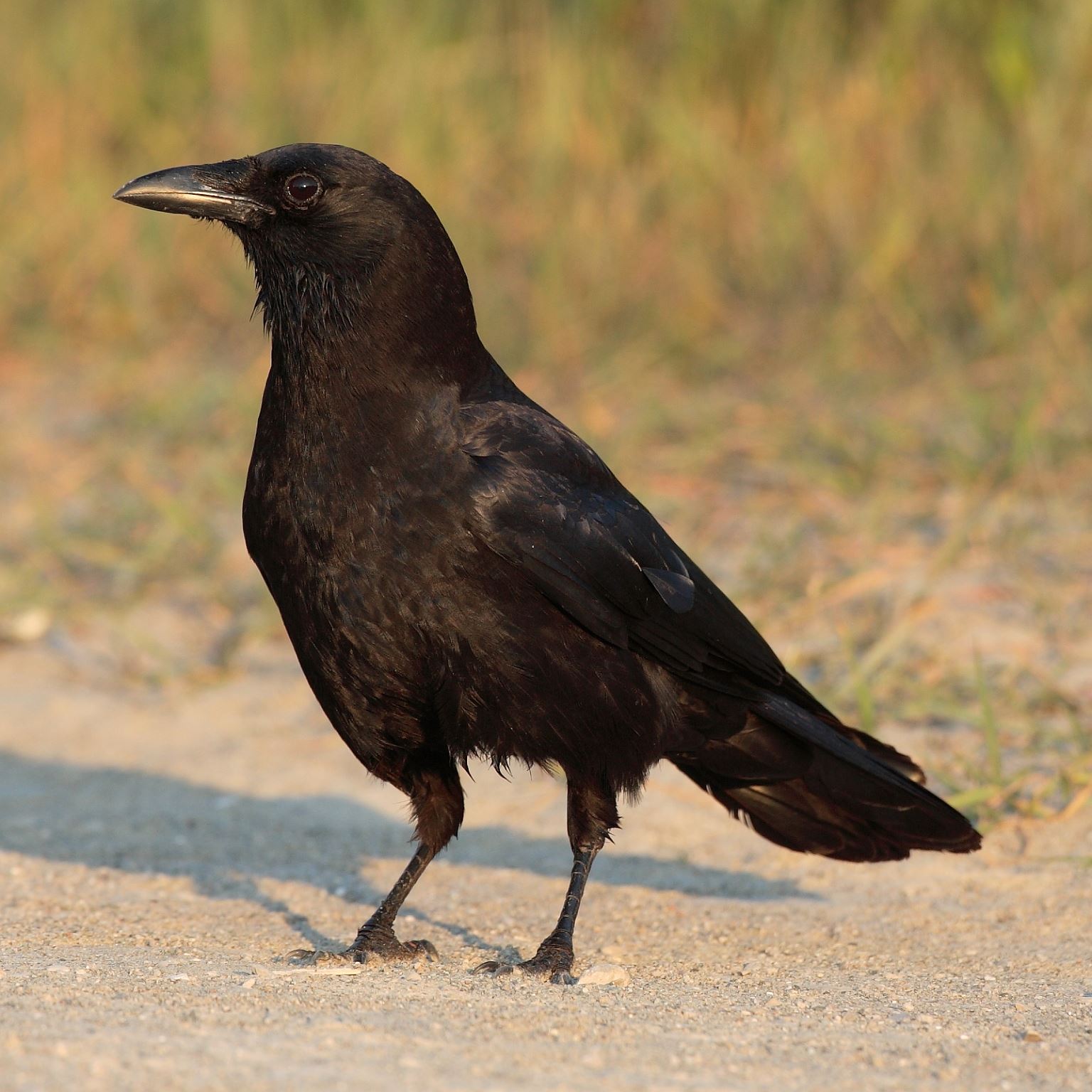 Most crows are year-round residents or short-distance migrators, and local crows stay in Ohio during the winter. Crows are large, all-black, and have a distinctive “cawing” call. They usually feed on the ground have a varied diet, including earthworms, insects and other small animals, seeds, and fruit. 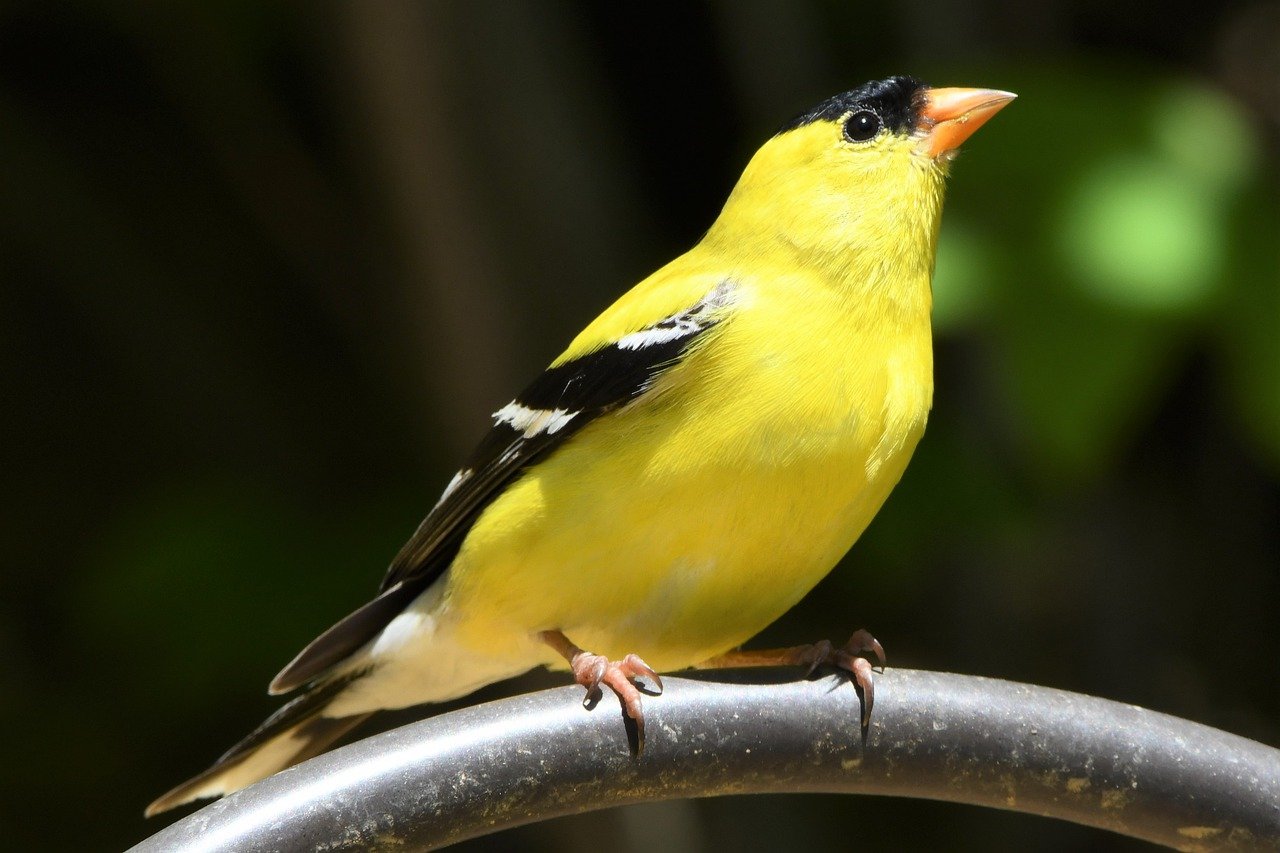 Goldfinches live in natural habitats like weedy fields and floodplains, where plants such as thistles and asters are common. They migrate short distances but can be found in Ohio year-round. Adult males in spring and early summer are bright yellow with a black forehead, black wings with white markings, and white patches both above and beneath the tail. Adult females are duller yellow beneath, olive above. 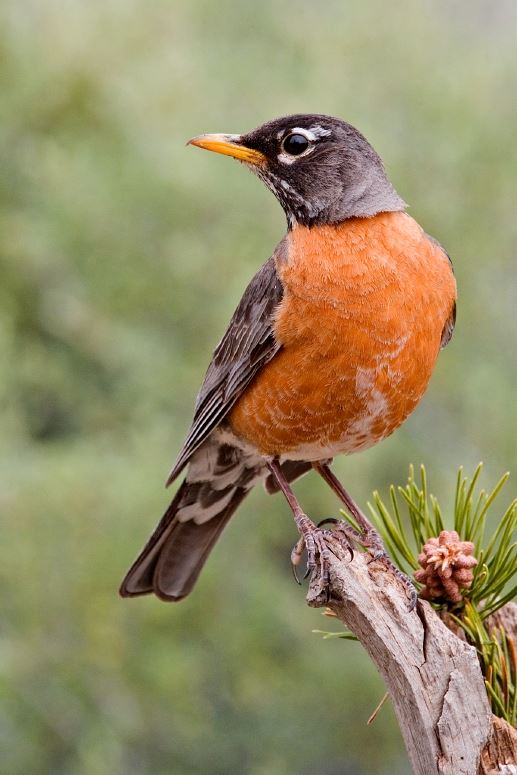 American Robins are common in open fields as well as pastures, woodlands, and pine forests in North America. Male robins are gray-brown, with warm orange chests and dark heads. Compared with males, females have paler heads that contrast less with the gray back. 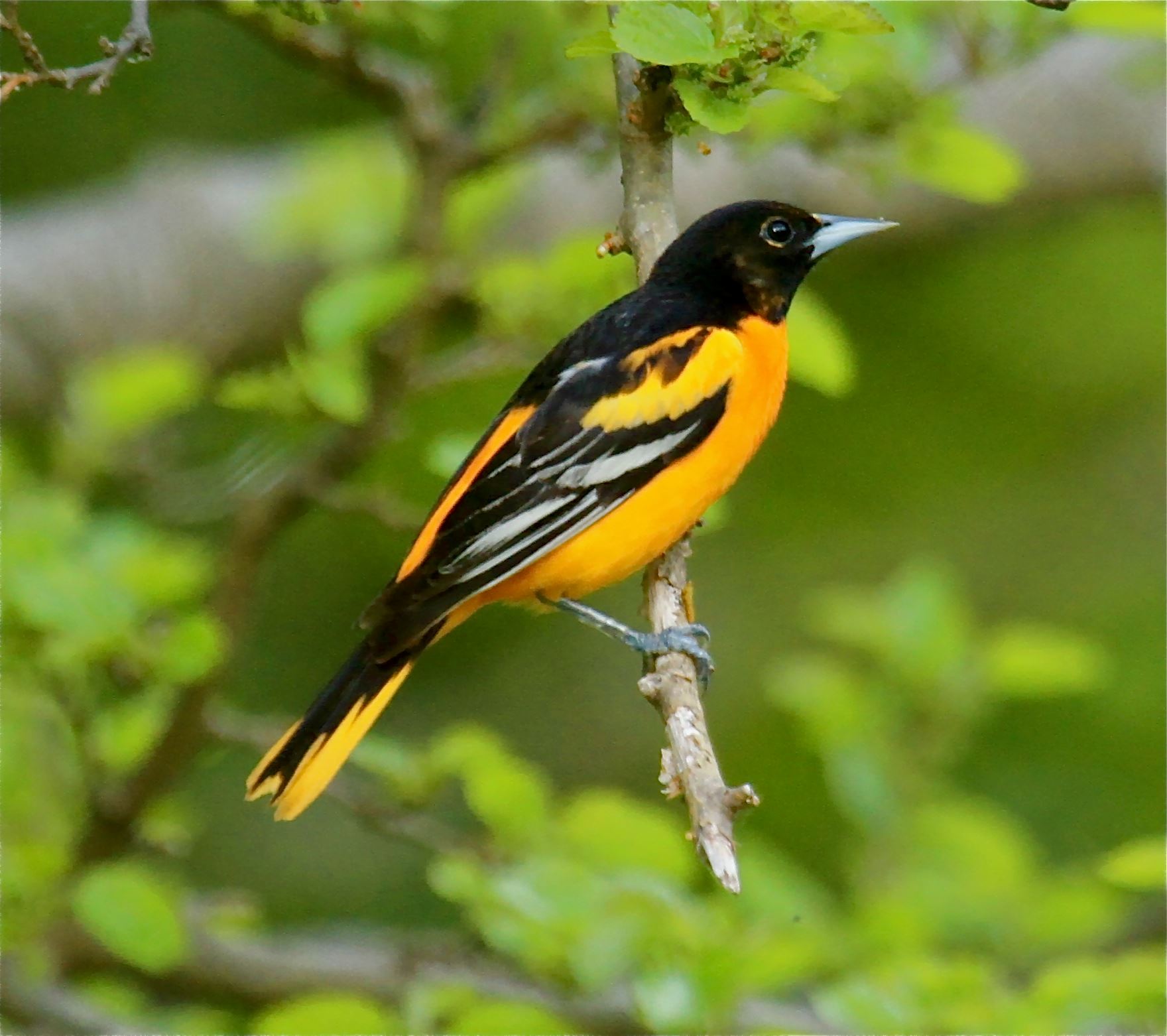 Male orioles are flame-orange and black, with a solid black head and one bar across the wings. Females are yellow-orange on the breast, grayish on top, and have two wing bars.

Baltimore Orioles spend summer and winter in entirely different ranges. From early April to late May, they arrive in central and eastern North America. In summer, they head for wintering grounds in Florida, Central America, the Caribbean, and even South America. 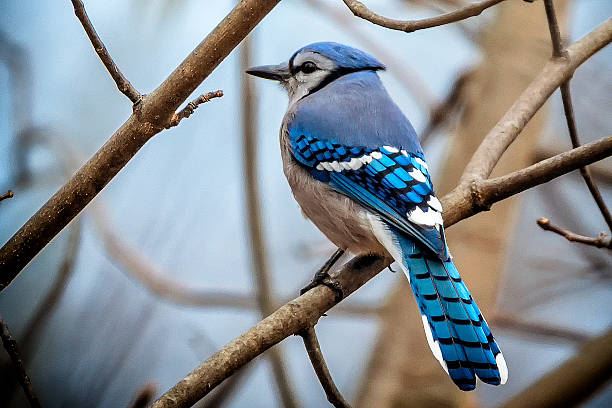 Blue Jays prefer forest edges and live in Ohio year-round. Jays are white or light gray underneath, various shades of blue, black, and white above. They can usually be heard before they're seen, with a variety of noisy calls. 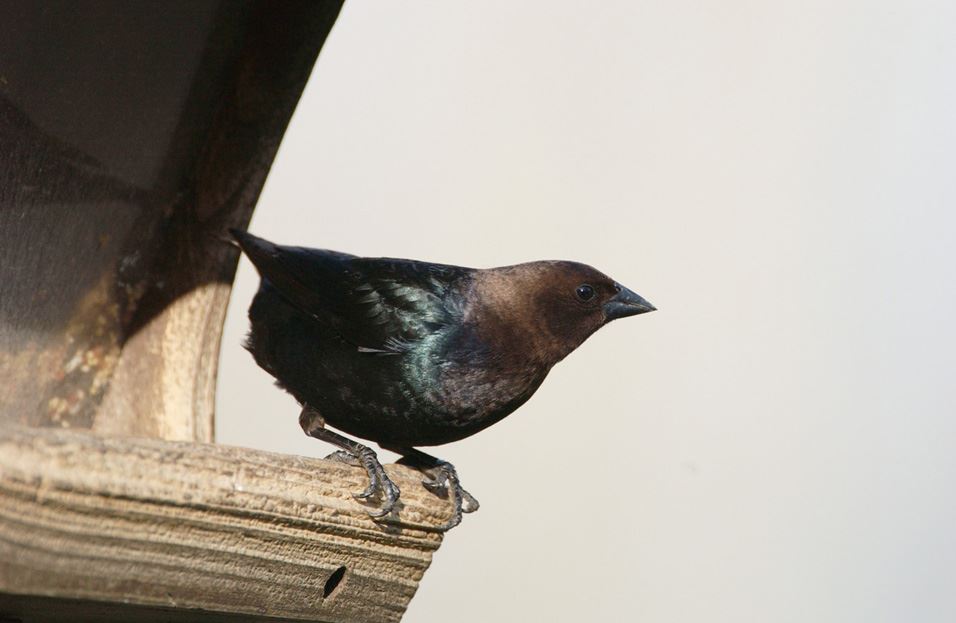 Brown-headed Cowbirds are smallish blackbirds, with shorter tails and thicker heads than most other blackbirds. Males are stocky, with distinctive brown heads and glossy black plumage. Females are lighter in color. Brown-headed Cowbirds move as far as 530 miles between breeding and wintering grounds but can be seen in Ohio year-round. 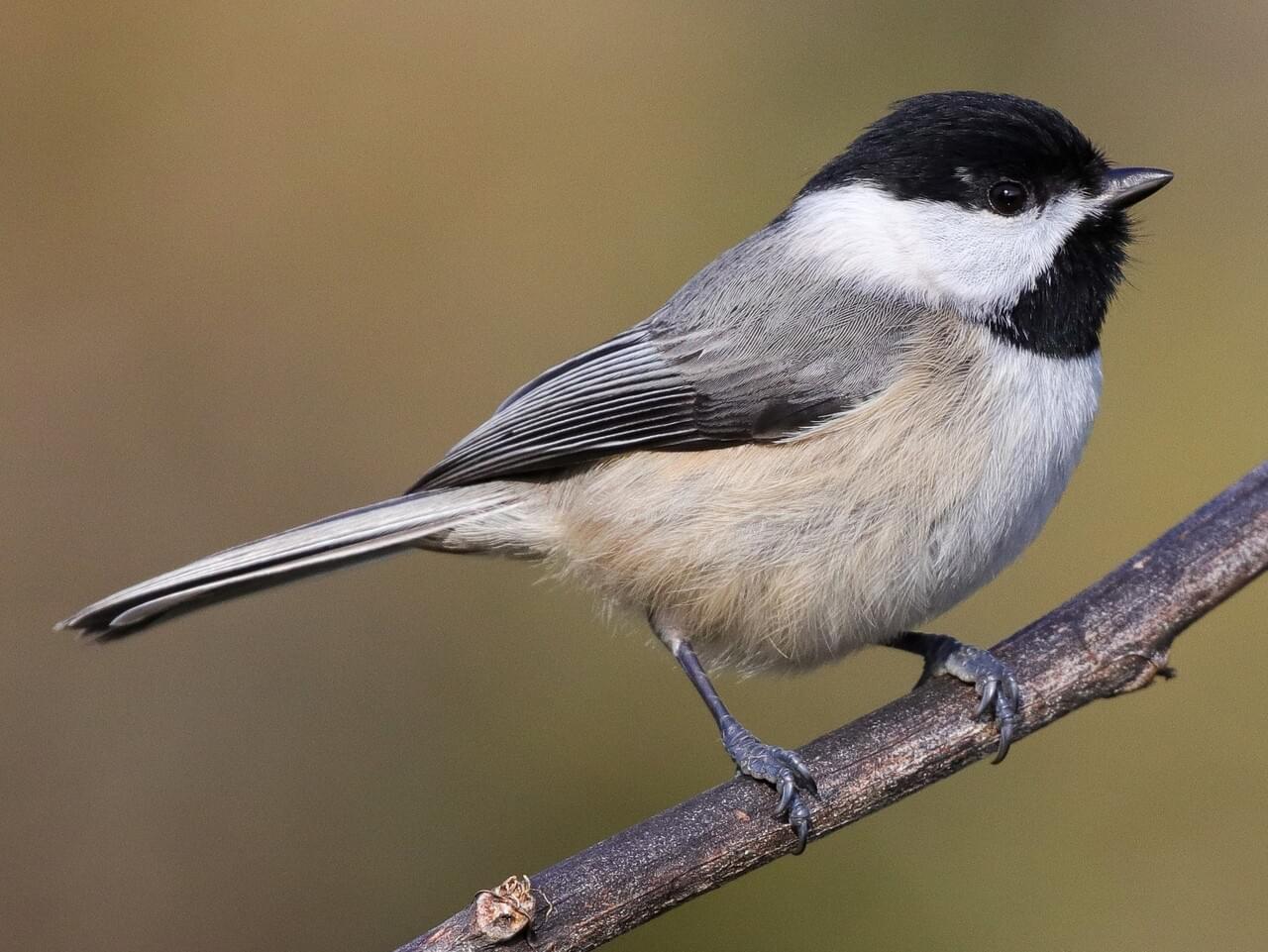 Carolina Chickadees are often mistaken for Black-capped Chickadees. This bird has a black cap, black bib, gray wings and back, and whitish underside. Carolina and Black-capped chickadees hybridize in the areas where their ranges overlap. They are non-migratory birds and can be seen in Ohio year-round. 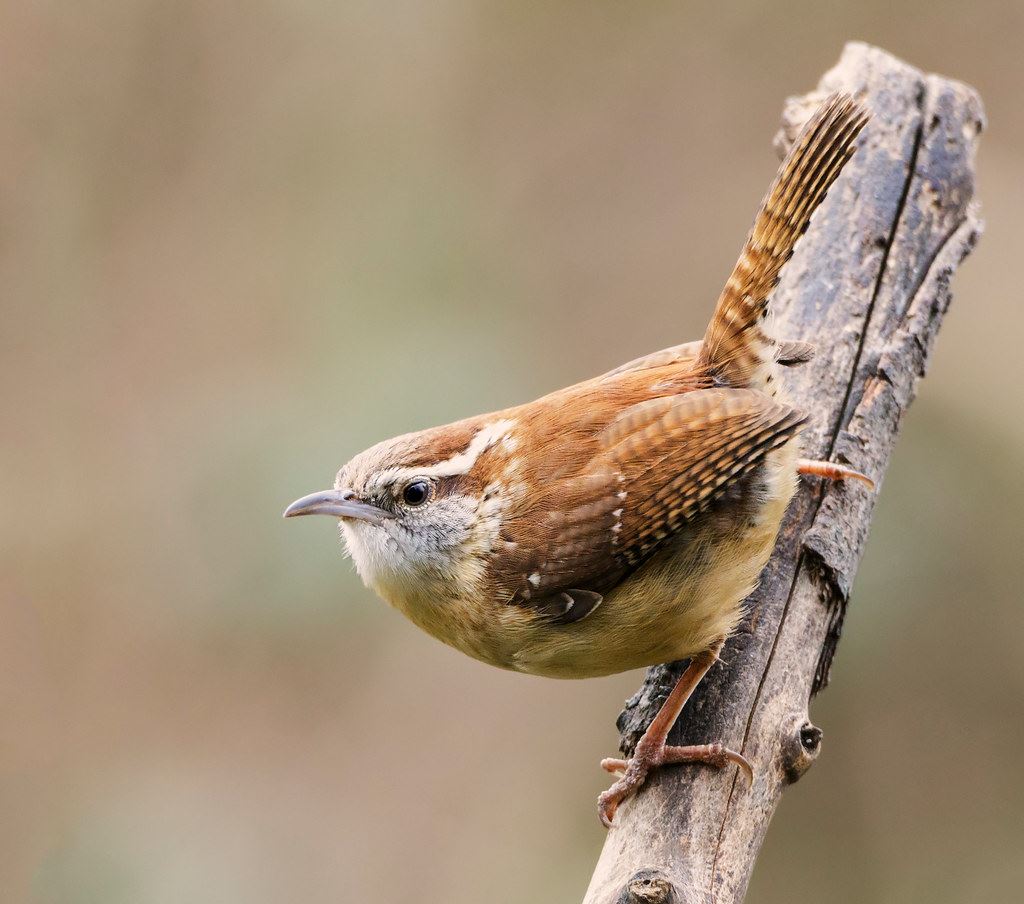 Thryothorus ludovicianus
Length: 4.7-5.5 in
Weight: 0.6-0.8 oz
Wingspan: 11.4 in
Call: Male wrens sing in a series of several quick, whistled notes, repeated a few times. Most songs sound like a three-part word, like “teakettle.”

Both males and females are a bright, reddish-brown above and warm buffy-orange below, with a long white eyebrow stripe and white throat. Wrens hang around vegetated areas and tend to hop up and down tree trunks looking for insects. These nonmigratory birds can be found all across the Midwest and the East coast. 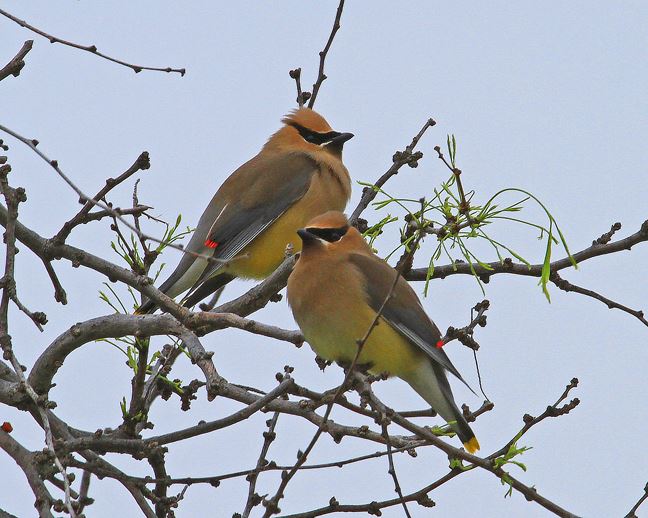 Waxwings are medium-sized and aerodynamic-looking birds. They are pale brown on the head, fading to a soft gray on the wings and back. The face has a narrow black mask, and the bird's tail is tipped in bright yellow. Wings have a narrow, bright-red tip.

Cedar Waxwings inhabit deciduous, coniferous, and mixed woodlands, and prefer spaces near streams. Some Cedar Waxwings travel south from Canada, and others reside in the Midwest year-round. Many eastern Cedar Waxwings winter in the southeastern U.S.

Juncos are small, gray birds with bright pink beaks and lighter bellies. In Ohio, most Juncos do not migrate. In Canada and the Northern U.S., Juncos travel south for the winter. Juncos are known to hop around the understory of trees in wooded areas. 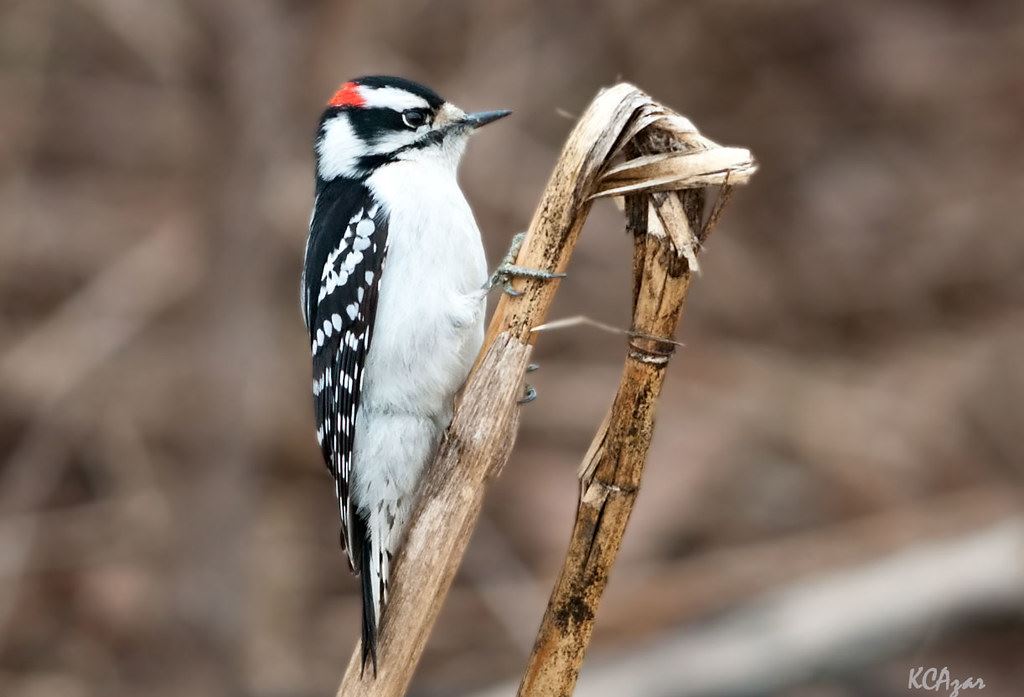 Dryobates pubescens
Length: 5.5-6.7 in
Weight: 0.7-1.0 oz
Wingspan: 9.8-11.8 in
Call: Woodpeckers tend to make a series of quick, high-pitched noises in a hoarse tone. Downy Woodpeckers are known for a high-pitched “pik” note and the descending whinny call.

Downy Woodpeckers like woodlots and forests, and are year-round residents. This little black-and-white woodpecker has wide shoulders, and males have red patches across the back of the head. They can be seen hitching around tree limbs and trunks as they forage for food. 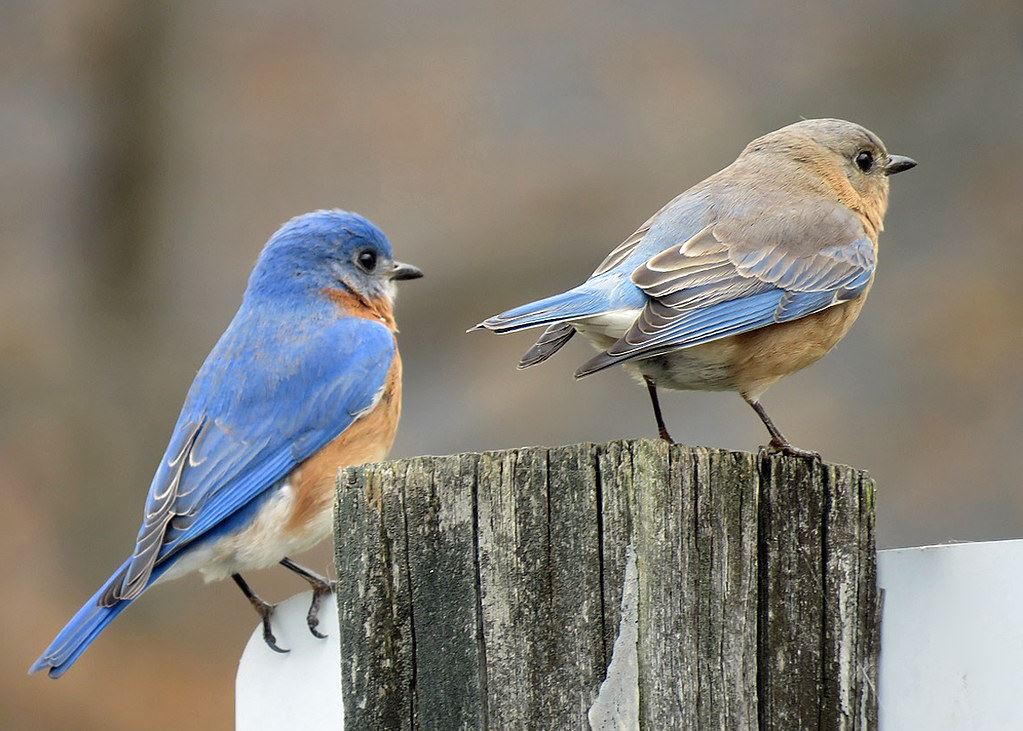 Bluebirds prefer grasslands and prairies and are often spotted in open country areas and meadows. In fall, Eastern Bluebirds fly south to the Southeastern United States or Mexico for winter.

A small thrush with a rounded head and plump body, the Eastern Bluebird is known for its blue color. Male Eastern Bluebirds are sky blue above, with a rust-colored breast. Females are more muted in color, but still have a bluish-gray back and orange-brown chest. 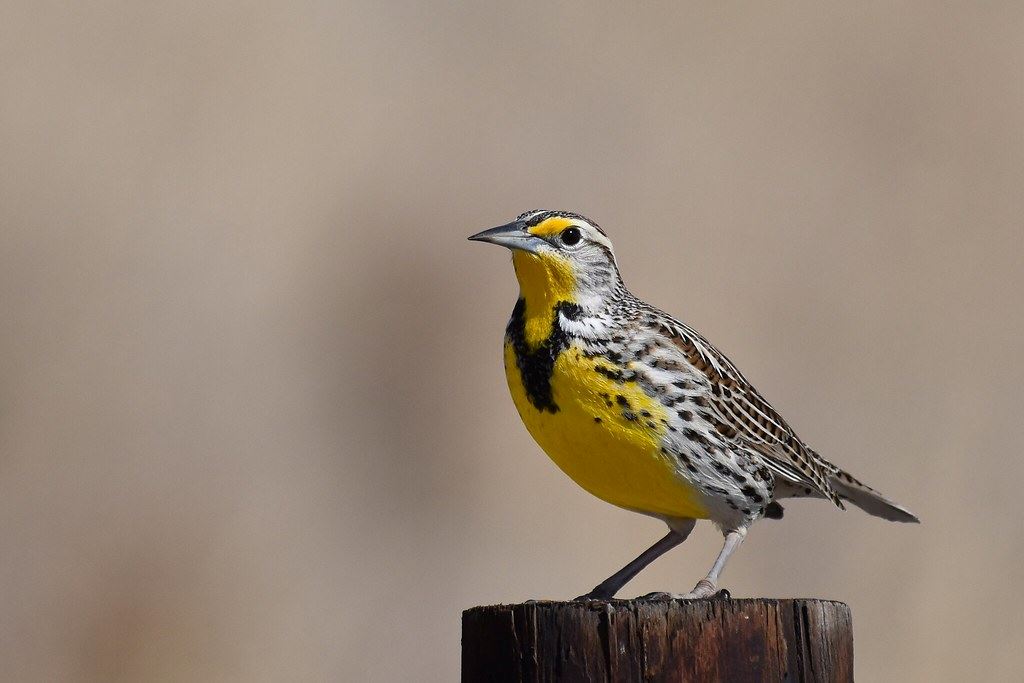 Meadowlarks are short-distance migrants but can be seen in Ohioan grasslands and fields year-round. They can often be spotted on fenceposts or utility lines. Eastern Meadowlarks are pale brown on the back and tail, with bright yellow chests and bellies. 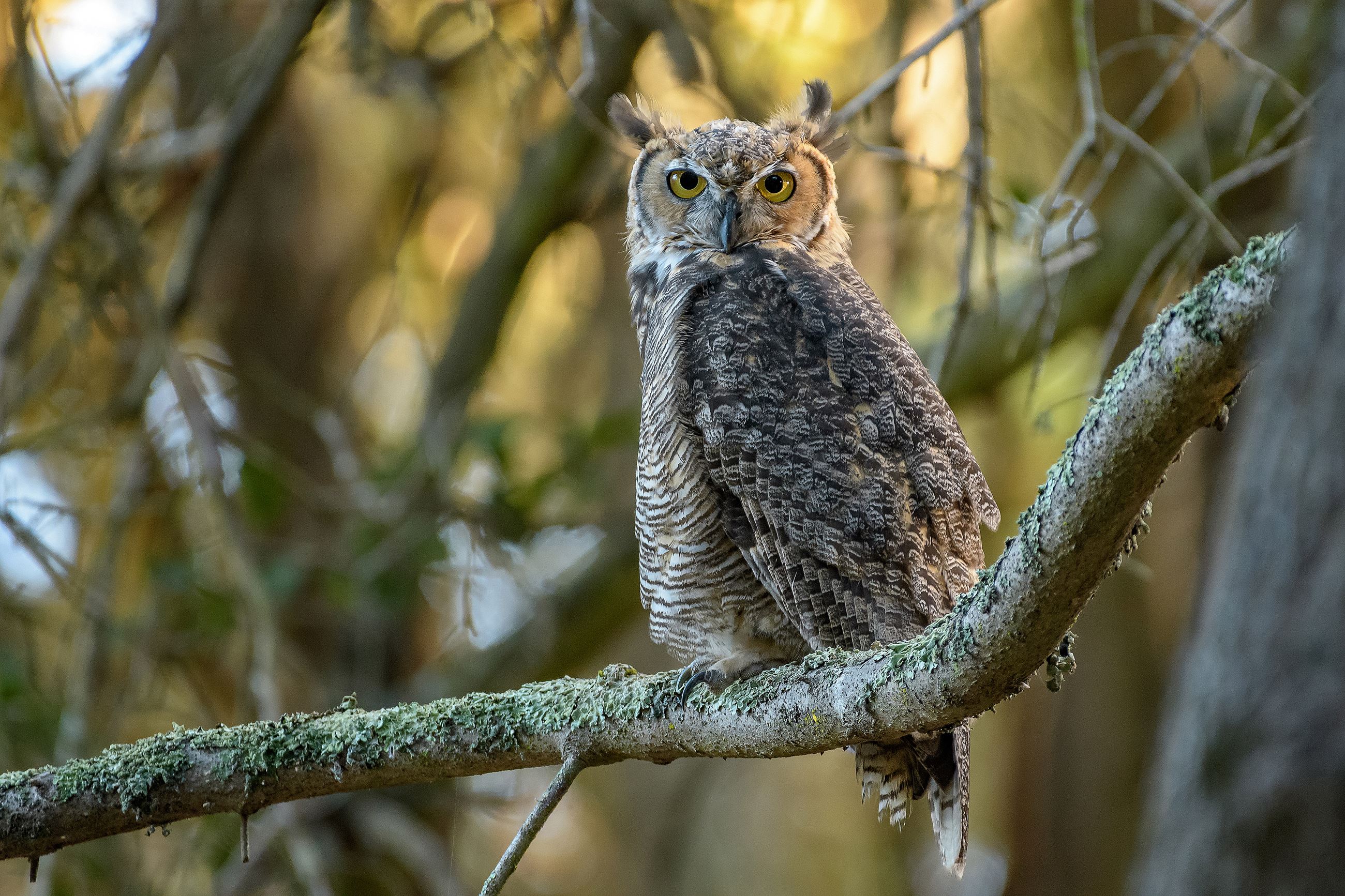 Great Horned Owls are among the most frequently-sighted owls in North America. They are frequently found in forests and in woodlands, swamps, and other re-growing areas. Great Horned Owls are large raptors, standing up to two feet tall. These owls are mottled gray or brown, with thick bodies and two prominent tufts on the head. 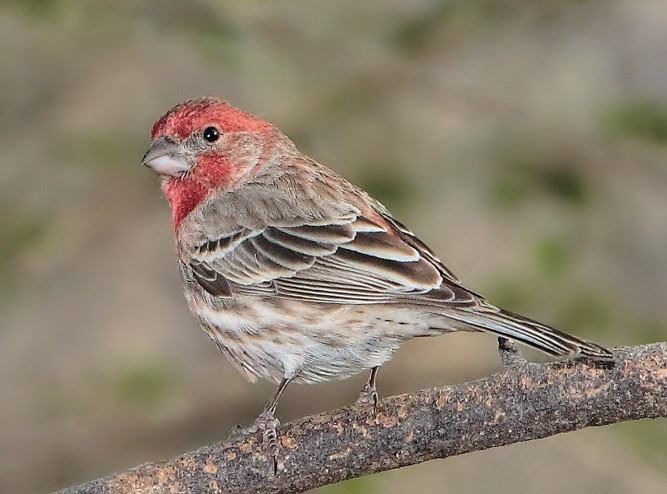 House Finches are resident birds in Ohio and can be spotted year-round in forest edges and developed areas. Finches tend to scout feeders, as well as the ground, for food. These small birds have short wings and large beaks, with relatively long tails. Males have rosy red faces and chests, with streaky black and brown backs. Females are grayish-brown with similarly blurry backs. 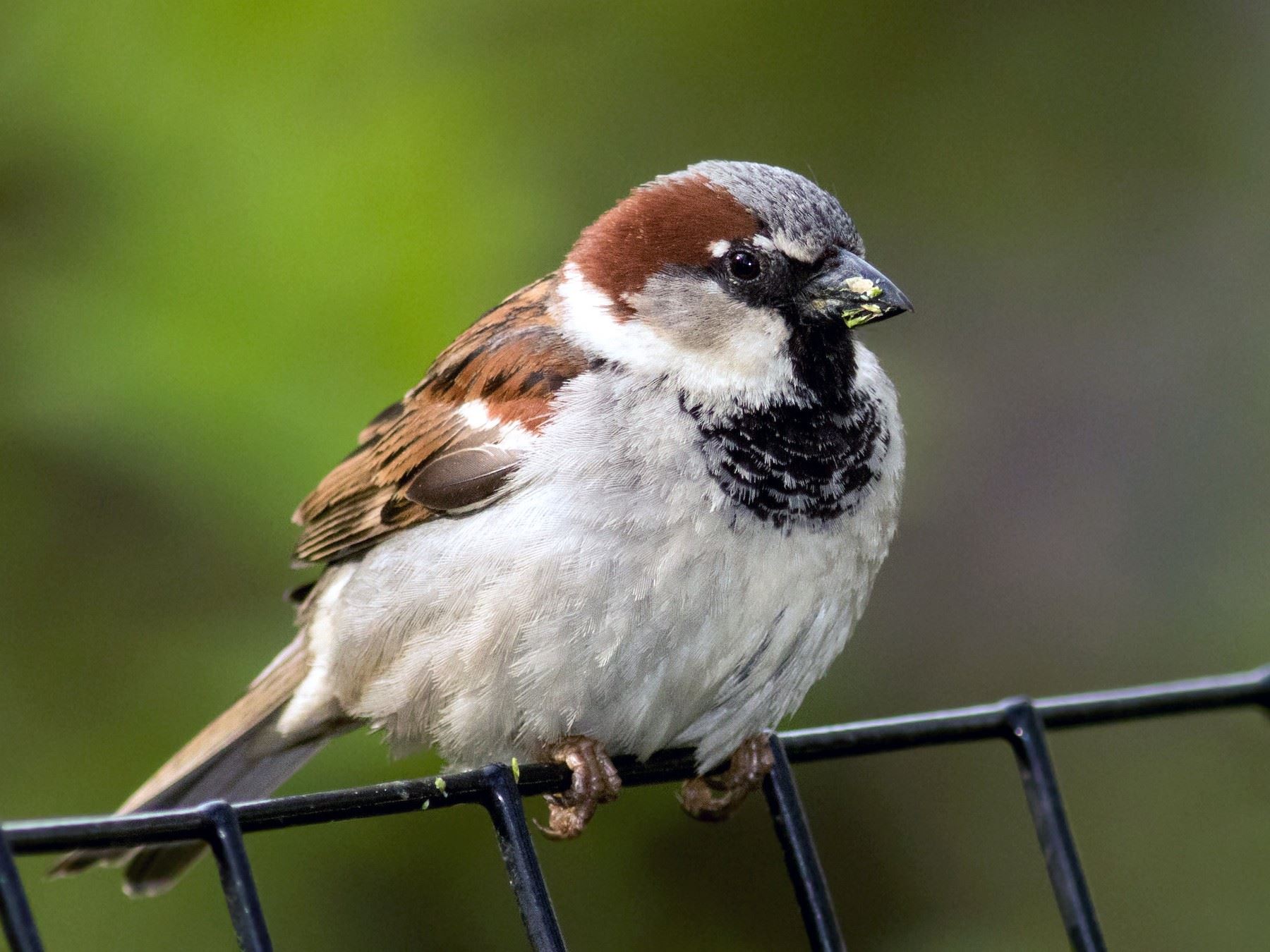 House Sparrows, an extremely common resident bird in North America, have coexisted with humans for centuries. Sparrows are common in farmland, as well as in parks and on city streets.

Male House Sparrows have gray heads with white cheeks and black facial markings, as well as brown backs and rufous necks. Females are a plain buff color, with backs striped in buff, black and brown. 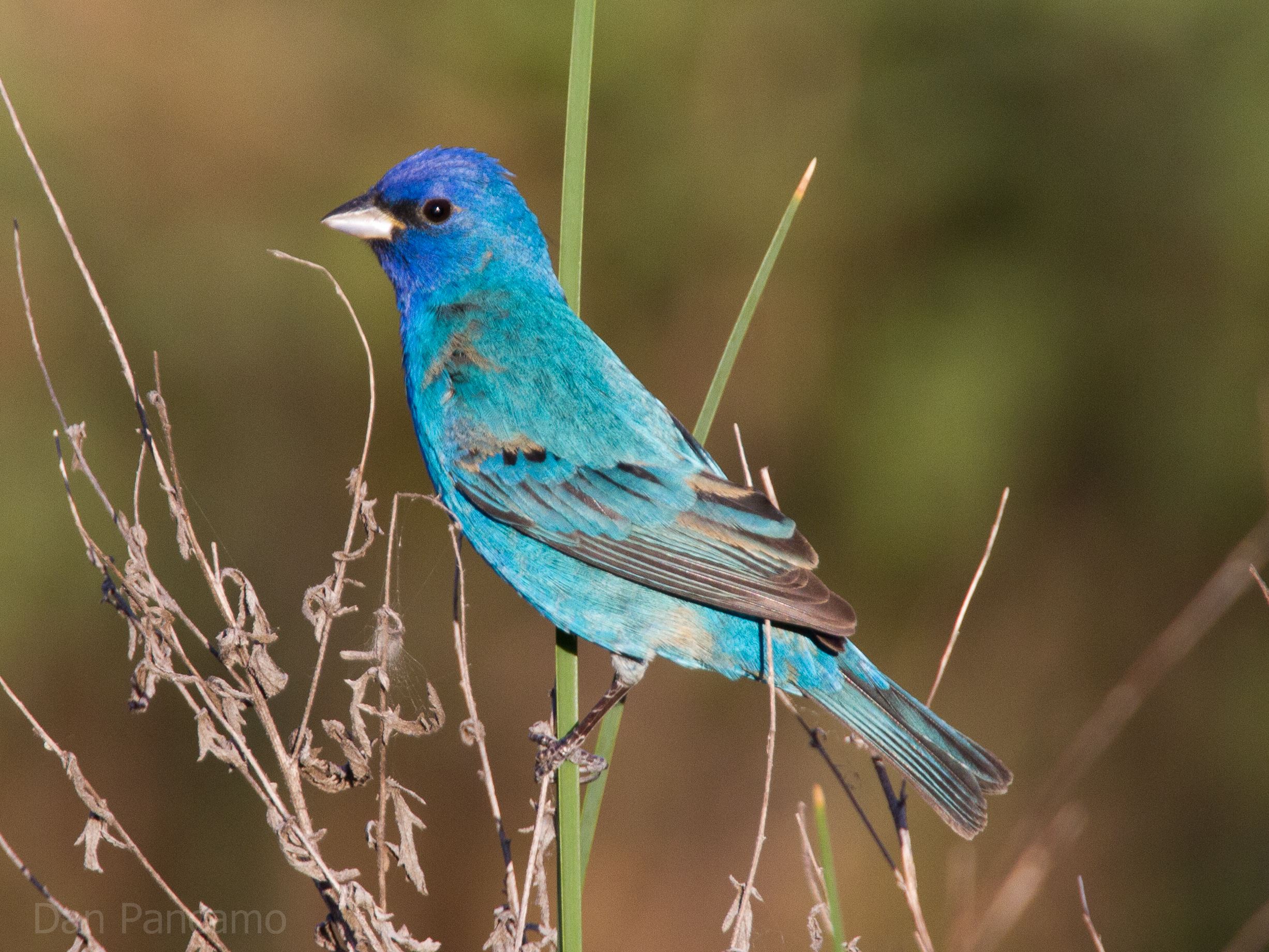 Long-distance migrants, Indigo Buntings fly over a thousand miles between breeding grounds in the eastern U.S. and wintering locations in Central and South America. From May to September, buntings can be spotted in Ohio treetops, shrubs, and telephone lines.

Male Indigo Buntings are sky-blue all over, with a slightly richer cobalt on the head and a shiny bill. Females are a taupe-brown with a touch of blue on the wings or rump. 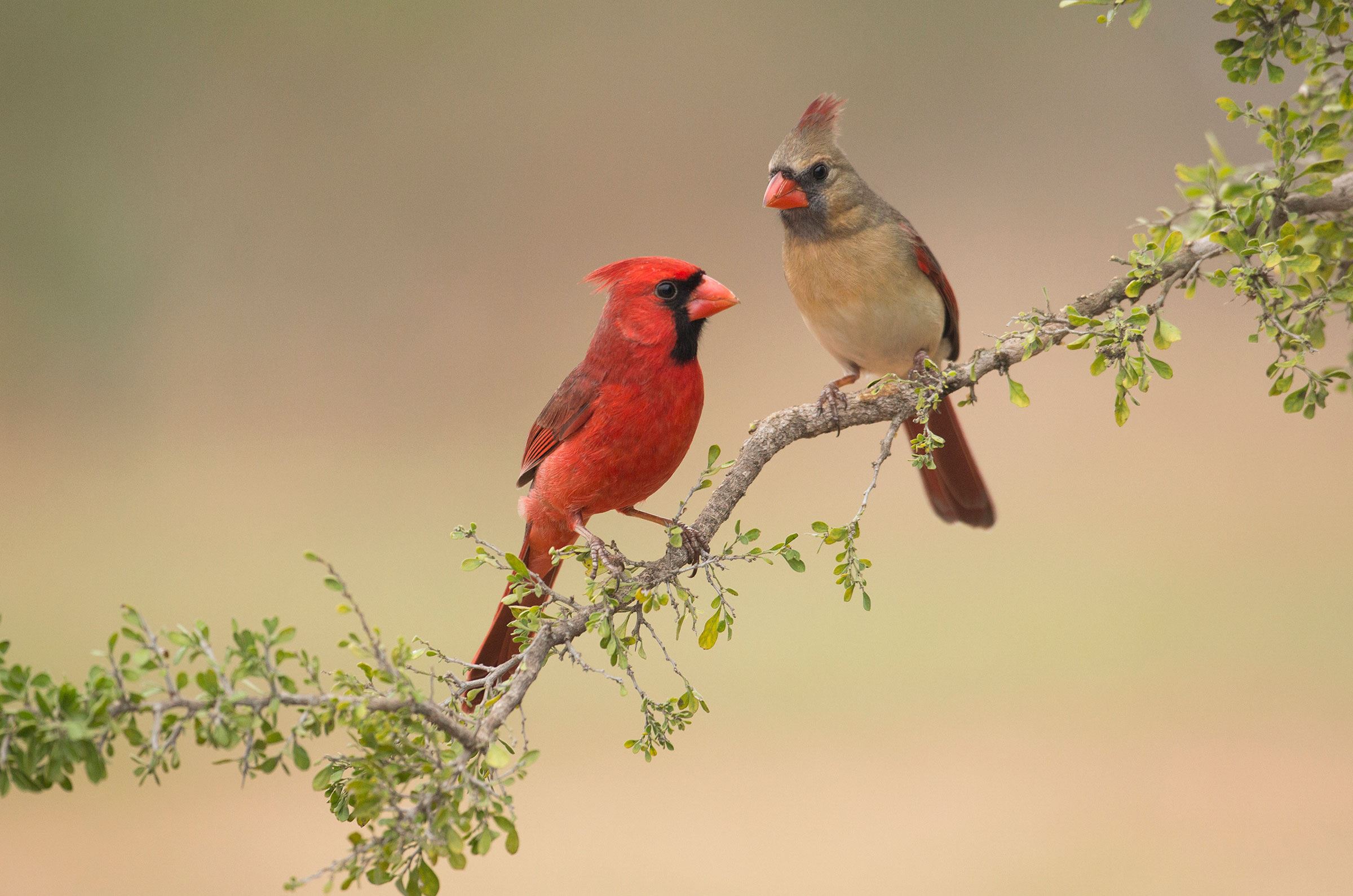 Cardinals are residents of the eastern United States, and their bright red plumage can be seen even in deep winter. Cardinals can be seen in open woodlands and yards.

Cardinals are large songbirds with prominent crests and a signature red color. Male cardinals are brilliant red all over, with a black face and reddish bill. Females are a pale brown with reddish tinges on the wings, tail and crest, and a similar black face to males. 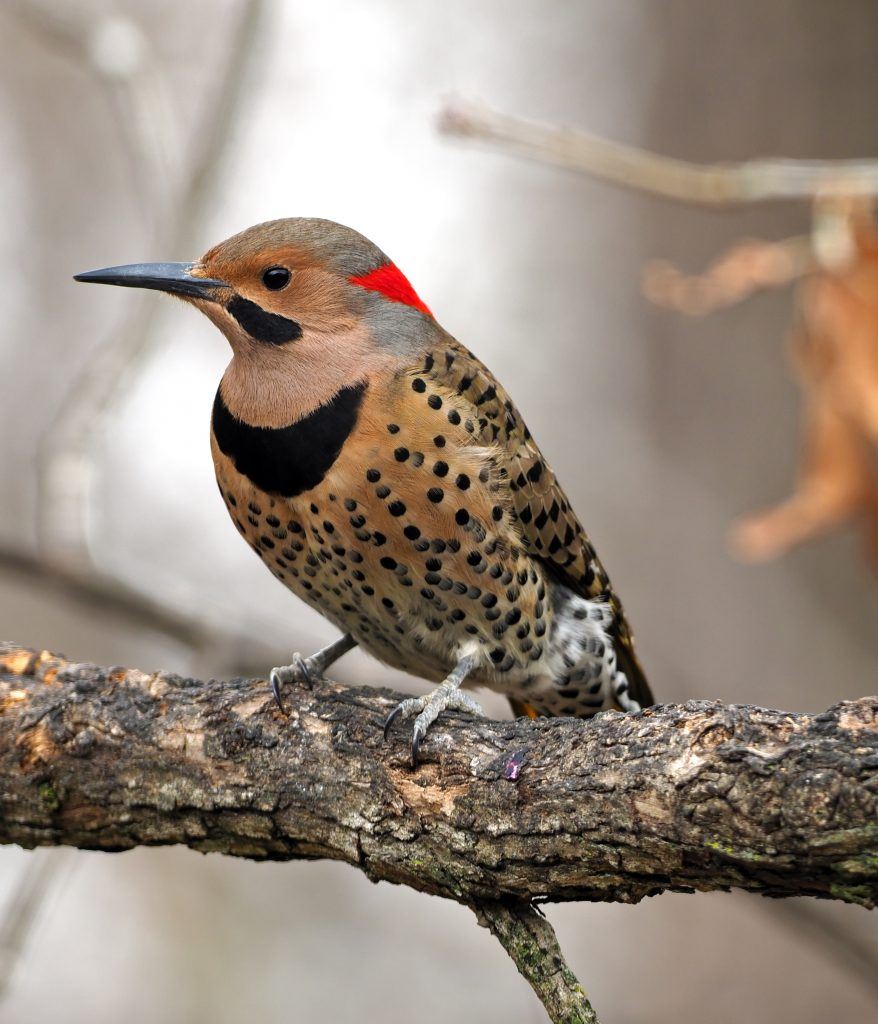 Flickers are fairly large woodpeckers native to the northeastern U.S. They can be found in Ohio year-round.

Both male and female Northern Flickers are quite colorful, with red or yellow tailfeathers and wings and brownish bodies patterned with spots, bars, and crescents. Flickers have downward-sloping bills and rounded heads, with long, flared tails. 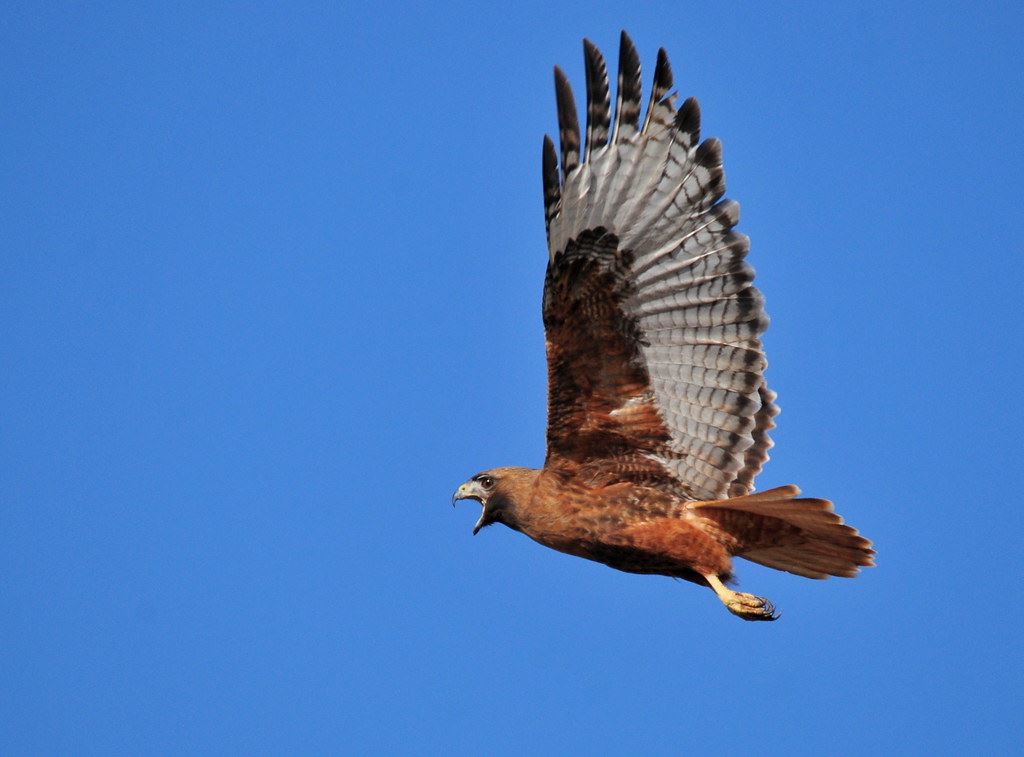 Red-tailed Hawks are residents in Ohio and across the Midwest and can be seen scouting for prey from trees and telephone lines. They often soar in circles over open fields and farmland.

Adult Red-tailed Hawks are large raptors, rich brown above and pale below with rusty-read tails. Females are larger than males, with very wide wingspans. 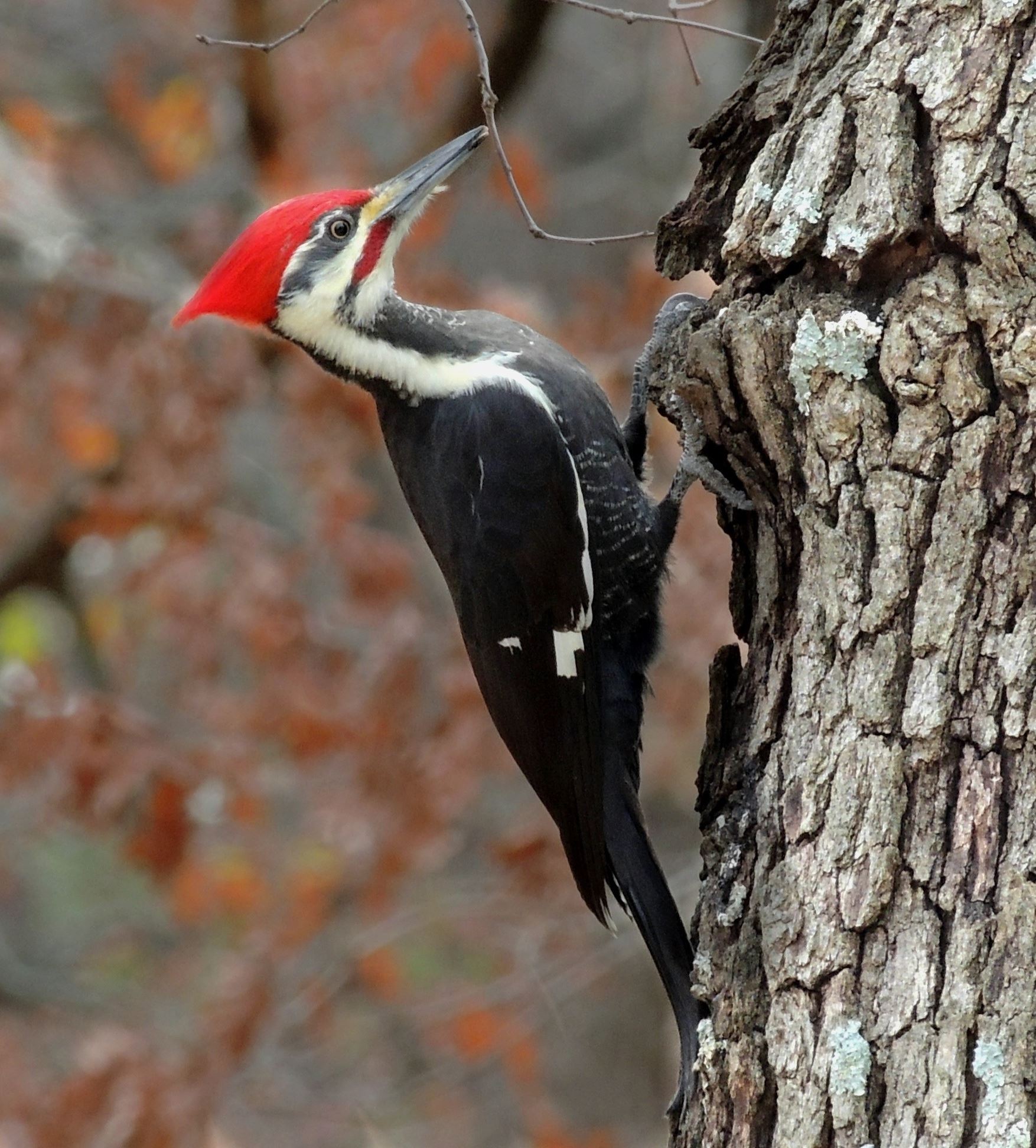 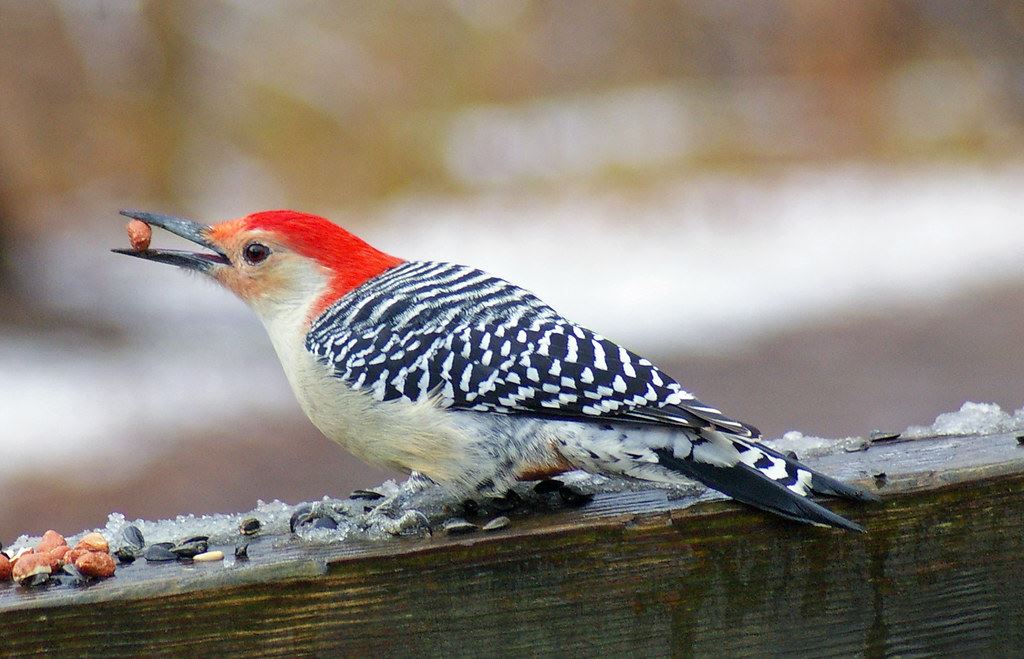 Red-bellied Woodpeckers hide among branches and trunks in forests across the eastern United States. They can be seen picking at the surface of trees to seek out insects. A medium-sized Woodpecker, the Red-bellied Woodpecker is round-headed and aerodynamic. This woodpecker has a black and white striped back, with a bright red cap and red spots on the cheeks. 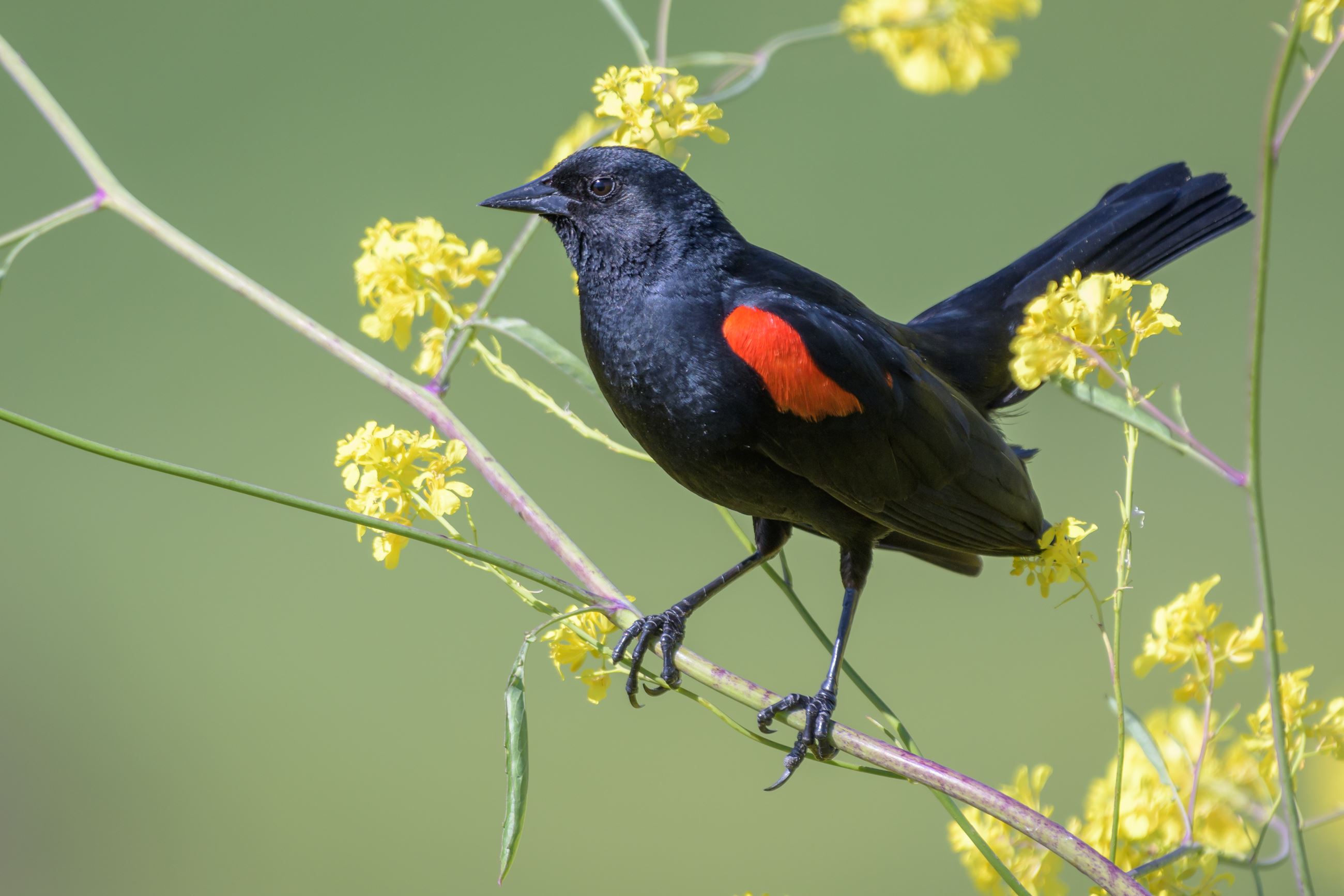 Red-winged Blackbirds are about the size of robins, with glossy black feathers and red and yellow shoulder patches. Females are a dark brown color, streaked with white and offset by a pale breast. 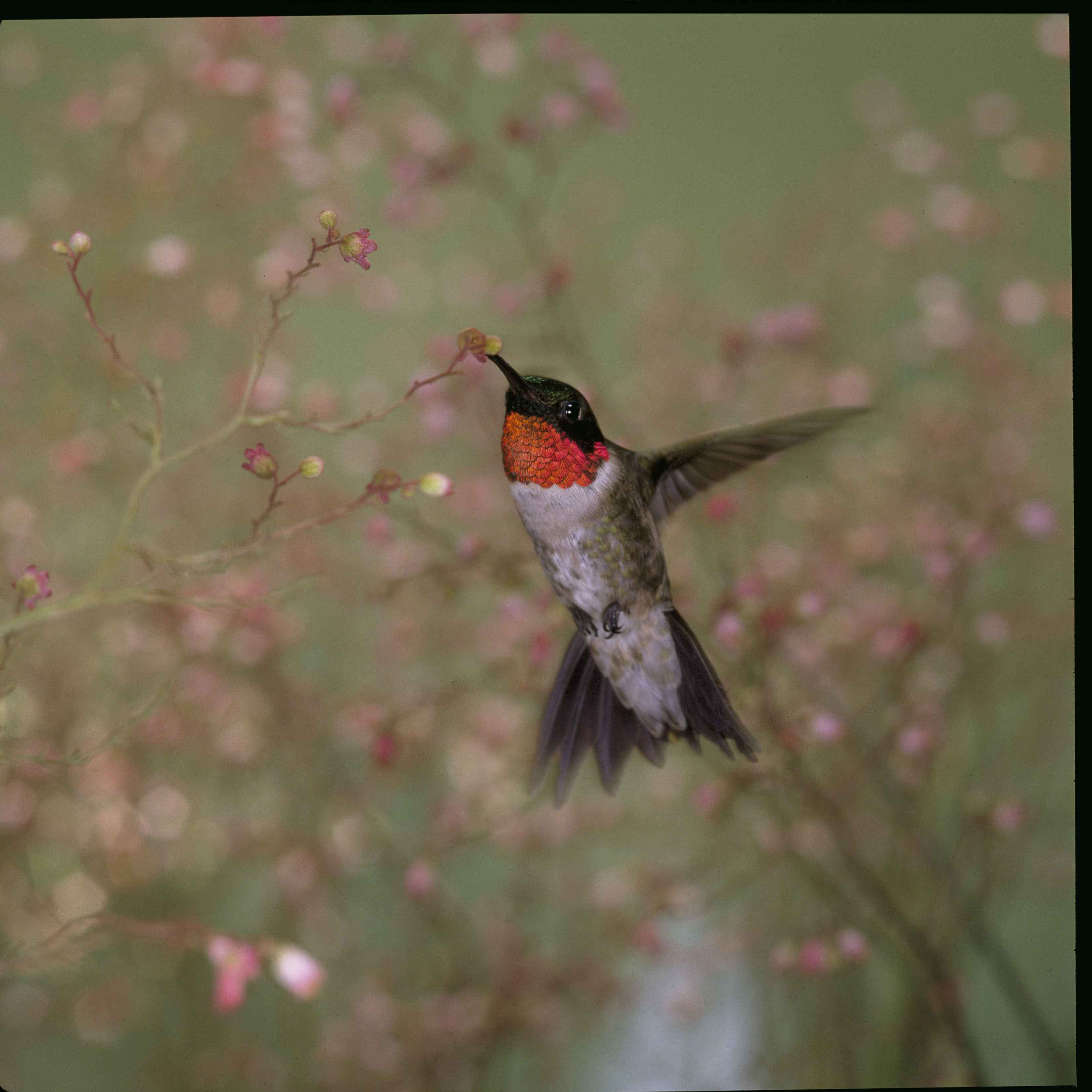 Ruby-throated Hummingbirds live in open woodlands, forest edges, meadows, grasslands, parks, and yards. They collect nectar from tube-shaped flowers and occasionally seek out small insects to eat. In Ohio, these hummingbirds can be seen from May through September. 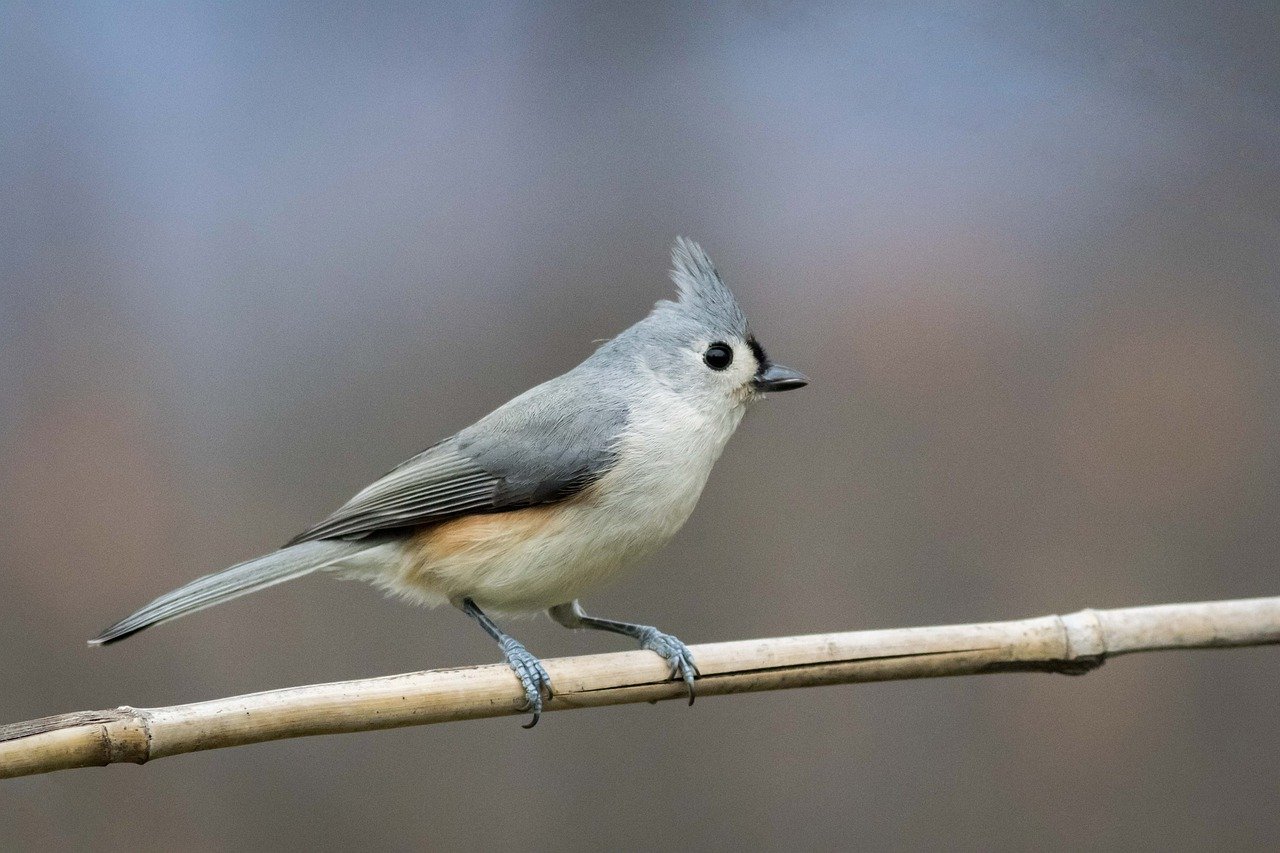 A small forest bird, the Tufted Titmouse is a year-round resident of Ohio and the rest of the Midwest. They’re most commonly sighted in deciduous forests and the edge of brushlands.

A small, stocky chickadee with a notable crest, the Tufted Titmouse has grayish above and white below, with a peach wash on the side. These birds have dark eyes and black foreheads. 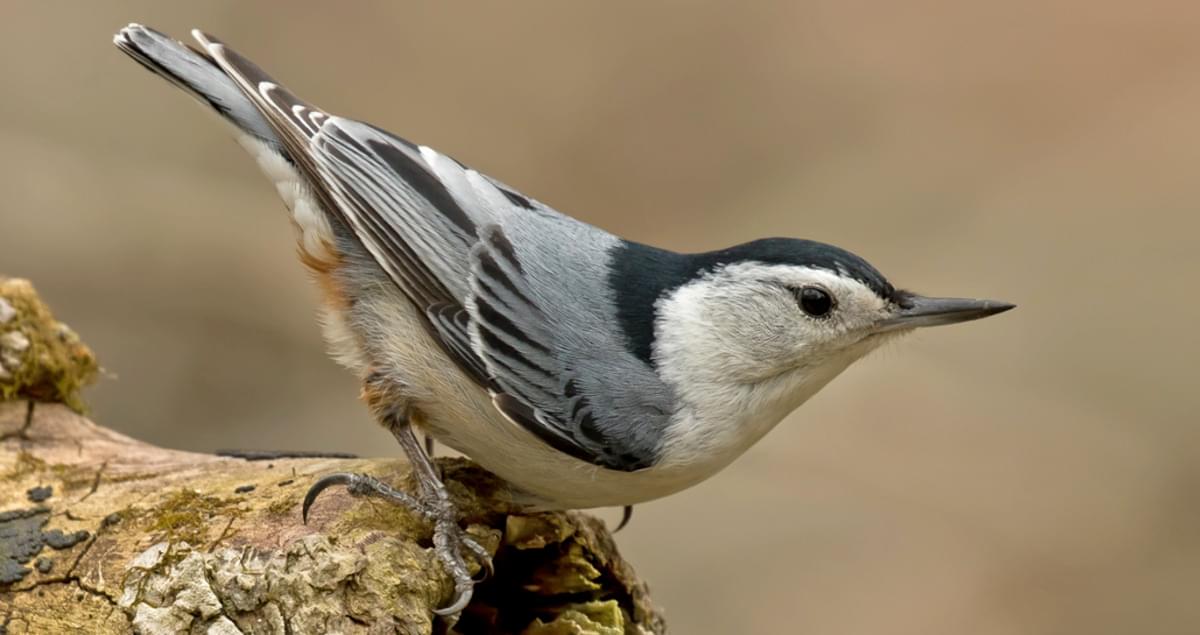 A year-round resident of Ohio, the White-breasted Nuthatch can be sighted upon the main branches of deciduous trees in forests and along forest edges. They tend to crack large nuts and acorns by whacking them into tree bark.

White-breasted Nuthatches are gray-blue on the back, with a white face and underparts. They have a black cap and neck frame, and a pale or chestnut belly.

Looking for more information? The following are great resources: